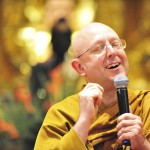 Whatever you do, wherever you go; the door of my heart will always be open to you.
Apapun yang kamu lakukan, kemanapun kamu pergi; pintu hatiku akan selalu terbuka untukmu.

Love is not liking somebody. Anyone can do that.
Love is loving things that sometimes you don’t like.
Cinta bukan menyukai seseorang. Semua orang bisa melakukan itu.
Cinta adalah mencintai hal yang kadang-kadang kamu tidak suka.

We should always be grateful for the faults in our partner because if they didn’t have those faults from the start, they would have been able to marry someone much better than us.
Kita harus selalu bersyukur dengan kekurangan pasangan kita karena jika mereka tidak mempunyai kekurangan itu dari awal, mereka seharusnya sudah menikahi orang lain yang lebih baik dari kita.

The secret of life is… everything is out of control.
Rahasia dalam hidup adalah… semuanya di luar kendali.

Whatever you think its going to be, it will always be something different.
Apapun yang anda pikirkan akan terjadi, akan menjadi sesuatu yang berbeda.

This too will pass.
Ini pun akan berlalu.

When I was around the age of thirteen, my father took me aside and told me something that would change my life.

The two of us were alone in his beaten -up old car, on a side street of one of the poorer suburbs of London. He turned to me and said this:
“Son, whatever you do in your life, know this. The door of my house will always be open to you.”

I was only a young teenager at the time . I didnt really understand what he meant, but I knew it was something important, so I remembered it. My father would be dead three years laterr.

When I became a monk in northeast Thailand, I thought over those words of my dad. Our home at that time was a small government subsidized apartment in a poor part of London_not much of a house to open a door into. But then I realized this was not what my dad really meant. What was lying within my father’s words, like a jewel wrapped in a cloth, was the most articulate expression of love that I know:
“Son, whatever you do in your life, know this. The door of my heart will always be open to you.”

My father was offering unconditional love. No strings attached. I was his son and that was enough. It was beautiful. It was real. He meant it.

It takes courage and wisdom to say those words to another, to open the door of your heart to somebody else, with no”ifs”. Some people might fear that if they do this, others would take advantage of them- but that’s not how it works, not in my experience. When you are given that sort of love from another, it’s like receiving the most precious of gifts. You tresaure it, keep it close to your heart, lest be lost. Even though at that time I only partially understood my dad’s meaning, even so I would not dare to hurt such a man.

If you give those words to someone close to you, if you really mean them, if they come from your heart, then that person will reach upwards, never down, to meet your love:o) 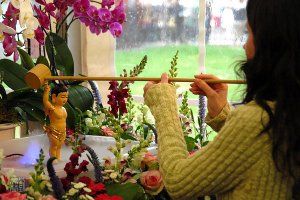 Around two thousand and five hundred years ago, located on wide plains on the north bank of the Rapti river in the southwest of what is now Nepal, there was an ancient kingdom called Kapilavatthu. At that time this area was part of India. The ruler, King Shuddhodana of the Shakya clan, and his wife, Queen Mahamaya, were the parents of Shakyamuni Buddha, the founder of Buddhism.

In the Spring of 623 BCE, while enjoying the beautiful scenery and walking under flowering sara trees at Lumbini Garden, Queen Mahamaya felt her birth pangs. As she held on to a branch of a sara tree, she soon gave birth to a Prince out of the right side of her torso as depicted in the bas relief on the left. During that time, celestial beings offered flowers, celestial kings offered clothes, the heavens played wonderful music, and nine dragons emitted water to bathe the Prince. After His birth, the Prince immediately walked and spoke. He took seven steps. Seven lotus blossoms sprung forth under each place where he stepped. With His right hand pointing towards the sky and the left hand pointing towards the ground as in the photo of the statue on the right, He said, “I am the only Honored one in the heavens and on earth.” He was known as Prince Siddhartha. The Prince became troubled by the scenes of birth, aging, sickness, death, and the sufferings of ordinary people. He decided to leave home and become a practitioner at the age of twenty-nine. After becoming a Buddha, He continued expounding Dharma for forty-five years. At the age of eighty, lying between two sala trees, He entered Nirvana.

On the holy birthday of Shakyamuni Buddha, followers who participate in the Dharma Assembly of Bathing the Buddha make offerings to establish their karmic conditions with the Buddhas and also to wholeheartedly beseech the empowerment of the Buddhas and to pray for peace and well being. While bathing the image of the Buddha with auspicious water, they vow to cultivate themselves in attaining the purity of their three karmas (body, speech, and mind) in the past, present, and future. They should receive the great and remarkable teachings and guidance of the Buddhas and uphold the correct belief. They must do this without holding to any superstitious beliefs. In this way, they can correspond to the great and compassionate vows of the Buddhas and attain accomplishment with the Bodhi state without regression. They should carry out the cultivation of a bodhisattva life after life until they attain the supreme enlightenment of a Buddha.

Before we are labelled idol worshippers by some non-Buddhist religionists, We may have to ask why we bathe the image of baby Buddha during Vesak? But, the question was wrongly asked- it is not a must to do so. Significance of the ritual aside, it is us who “need” and want to bathe the Buddha; the Buddha does not need to be bathed it is rather an expression and reminder to cleanse our inner Buddha-nature- purify.

So as you or your friends visit any Buddhist temples during this Vesak Season, do explain to them the real meaning behind this symbolic and meaningful gesture Buddhists do, we out to keep this in mind “As we bathe the statue of Prince Siddhartha with this scoop of holy water in our hands, we shall pray sincerely to be rid of the defilements of greed, hatred and ignorance, so that our body, speech and mind may remain pure. Furthermore, we shall wish for a peaceful and harmonious society that is free from violence, dishonesty or evil. With the merit gained from bathing of the Buddha, may we rid our minds of defilements, and at the same time cleanse and beautify our society and country, transform this land of suffering into one of bliss, and guide the stray and evil minds onto the path of virtue.

Only by truly understanding the true meaning of “Bathing of the Buddha” only will we, our family and friends benefit from the Blessings of our Lord Buddha.

You may wish to recite the verse as you bathe the Buddha statue: